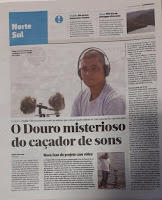 Intermission: an Audio portrait of a place – mapping the space between A and B

Framework radio
Edition 386
Participation in the Framework Radio Broadcast, with a composition of field recordings.
Framework is a radio network which broadcasts in several radio stations across the world.
http://www.frameworkradio.net/
2012

AIR/EAR - a collective installation of radio and sound art in Santa Fe , Argentina
Curated by Rubén Marino Tolosa.
Contribution with a composition/collage of field recordings captured in 2012 in the Douro River, North of Portugal. (2012)
http://www.radiosystem.com.ar/


“AIR/EAR”
AIR/EAR - a collective installation of radio and sound art planned for Santa Fe , Argentina
Curated by Rubén Marino Tolosa.
Contribution with a composition/collage of field recordings captured in 2010 in the Douro River, North of Portugal. (2011)


"Last year I stumbled across Green Field Recordings, a Portuguese netlabel that focuses on works derived from pure field recordings. This chance encounter led me to a wonderful selection of publications from the likes of Anton Mobin, James Wyness, David Velez and others who are rapidly becoming respected figures in the world of phonography and sonic art.
Several titles in the Green Field Recordings series focus on water. This is not particularly surprising given the infinite range of sounds created by water and it’s always interesting to see what direction the recordist decides to take their work; whether to manipulate the raw field recordings into new pieces or simply present the unadulterated recordings in their original context.
Released earlier this year, Rio Douro / Douro River vol. 1 follows the path of pure phonography, presenting a collection of recordings that document stages of a journey made by Virgilio Oliveira  along the Rio Douro during the summer of 2010. An accompanying blog, www.douro-mapasonoro.blogspot.co.uk, was set up to provide additional information about the project and is well worth a visit. The intention of the recording trip was to capture the different sonic ambiences that exist along the course of the Rio Douro and Oliveira certainly presents us with a mixed bag of soundscapes.
The Rio Douro acts as a hub from which different sound environments radiate and this notion of the river’s central role is reflected in Oliveira’s selection. The river is not just a flowing body of water cutting through the Portuguese landscape, but rather a crucial element of the larger environment with an influence that extends further than is initially perceived. A very nice piece of work."
http://thefieldreporter.wordpress.com/2012/03/23/91/

"At just under 20 minutes in length, Rio Douro Vol 2 comes to a close far too quickly. I for one could easily have listened to more. This is not a criticism though. In many ways, this composition is perfect the way it is; the piece is just long enough to facilitate a good number of varied field recordings yet never becomes boring or repetitive. Thus, being left wanting more can only be taken as a compliment and reflects Oliveira’s competence as both a field recordist and an artist."